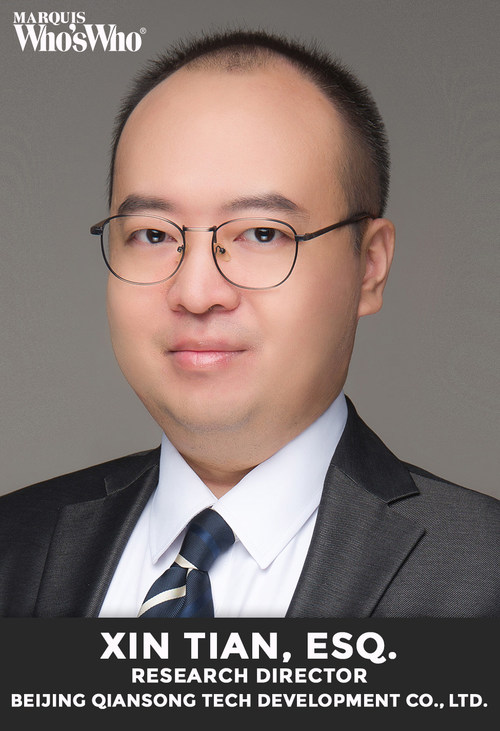 NEW YORK, Oct. 13, 2021 /PRNewswire/ -- Xin Tian, Esq., is a distinguished biographee of Marquis Who's Who. As in all Marquis Who's Who biographical volumes, individuals profiled are chosen from among a pool of the most prominent professionals and are selected on the basis of current reference value. Factors such as position, noteworthy accomplishments, visibility, and prominence in a field are all taken into account during the selection process.

Born in China, Mr. Tian's interest in science drew him to China Pharmaceutical University in the city of Nanjing. While completing a Bachelor of Science in biotechnology, he discovered that the United States and China had very different philosophies concerning the law and bared extremely different bodies of regulations regarding scientific research. Upon graduation, Mr. Tian relocated to New York and obtained a Master of Science in biology from New York University in 2011.

More on Nyenta.com
Since 2018, Mr. Tian has flourished as a research director for Beijing Qiansong Tech Development Co., Ltd., where he utilizes his expertise in patent law to support the advancement and commercialization of pharmaceuticals and technology. In 2019, he acquired two patents, both of which concern the sharing and protection of digital data. Mr. Tian also focuses on harnessing patents to foster a mutually beneficial relationship between the U.S. legal system and the science sector as a whole.

Alongside his responsibilities as a patent lawyer and scientific researcher, Mr. Tian has contributed articles to a number of professional publications and given presentations at several conferences organized by the Institute of Electrical and Electronic Engineers. He additionally harbors a deep passion for filmmaking and has participated in the creation of multiple short films. In 2014, his short film, "Lost in New York," was selected for an Award of Merit at the IndieFEST Film Awards.

In the coming years, Mr. Tian intends to secure at least two new patents while establishing a new business venture in his hometown of New York City. Though science tends to evolve at a much faster rate than the law, he believes that new laws must eventually be created to regulate the myriad of groundbreaking scientific developments on the horizon. Mr. Tian is proud to help regulatory bodies adapt to the inevitable emergence of new areas of scientific research, especially in relation to health care. In addition to filmmaking, he enjoys swimming and attending Broadway productions in his spare time.

More on Nyenta.com
About Marquis Who's Who®:
Since 1899, when A. N. Marquis printed the First Edition of Who's Who in America®, Marquis Who's Who® has chronicled the lives of the most accomplished individuals and innovators from every significant field of endeavor, including politics, business, medicine, law, education, art, religion and entertainment. Today, Who's Who in America® remains an essential biographical source for thousands of researchers, journalists, librarians and executive search firms around the world. Marquis® publications may be visited at the official Marquis Who's Who® website at www.marquiswhoswho.com.

SOURCE Marquis Who's Who