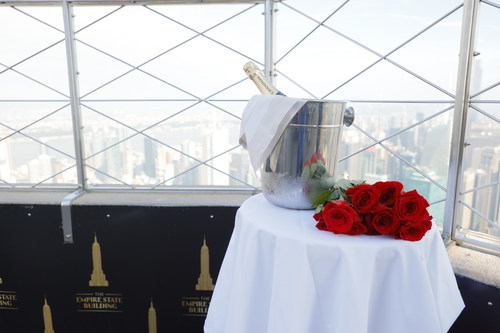 Guests can now pop the question and toast to their "yes!" at the top of the World's Most Romantic Building

NEW YORK, Oct. 18, 2021 /PRNewswire/ -- Today, the Empire State Building (ESB) launched 'Happily Ever Empire' – an unforgettable proposal package that provides couples with VIP access to the Observatory Experience. Ticket holders are invited to pop the question at a prime, dedicated corner of the building's iconic, open-air 86th Floor Observatory and pop a bottle of Champagne to celebrate the memorable moment.

The exclusive package – priced at $1,000 per couple – includes a private guided tour through the Empire State Building's immersive exhibits, which feature the building's history and the classic love stories that have taken place within. After couples have celebrated their engagement on the world-famous 86th Floor Observatory, they're invited to head up to the 102nd Floor Observatory, with its floor-to-ceiling windows for breathtaking photos with stunning 360-degree views.

"There is no better place to celebrate love than the World's Most Romantic Building," said Jean-Yves Ghazi, president of the Empire State Building Observatory. "The Empire State Building has played host to so many love stories in its history, and we are delighted to now offer an exclusive, romantic, and customizable proposal experience for couples from around the world."

The Empire State Building's Observatory Experience recently underwent a top-to-bottom overhaul that includes a dedicated guest entrance, a 10 thousand square foot digital and tactile museum that celebrates the icon from the moment it was conceived to its current place in pop-culture, and the completely re-imagined 102nd Floor Observatory. The renovations also include industry-leading indoor environmental quality (IEQ) improvements such as active bi-polar ionization, MERV 13 filters, and increased ventilation which led to the building's achievement as the first  in the Americas to receive the WELL Health-Safety Rating.

Tickets are available at https://www.esbnyc.com/buy-tickets/happily-ever-empire Must be 21 years old to purchase.

More on Nyenta.com
The 'Happily Ever Empire' package must be booked at least 24 hours in advance, with limited reservations available each day. Photographers, family, and friends must purchase Express tickets separately to take part in the celebration here.

More information about the Empire State Building and its Observatory Experience can be found at www.esbnyc.com.

About the Empire State Building

The Empire State Building, "The World's Most Famous Building" owned by Empire State Realty Trust, Inc. (ESRT: NYSE), soars 1,454 feet above Midtown Manhattan from base to antenna. The $165 million reimagination of the Empire State Building Observatory Experience creates an all-new experience with a dedicated guest entrance, an interactive museum with nine galleries, and a redesigned 102nd Floor Observatory with floor-to-ceiling windows. The journey to the world-famous 86th Floor Observatory, the only 360-degree, open-air observatory with views of New York and beyond, orients visitors for their entire New York City experience and covers everything from the building's iconic history to its current place in pop-culture. 2021 is the 90th anniversary year of the Building which officially opened on May 1, 1931. Declared "America's Favorite Building" by the American Institute of Architects, as well as the world's most popular travel destination by Uber and the #1 New York City attraction by Lonely Planet, it welcomes more than 4 million annual visitors from around the world.

Empire State Since 2011, the building has been fully powered by renewable wind electricity, and its many floors primarily house a diverse array of office tenants such as LinkedIn, Shutterstock, and Global Brands Group, as well as retail options like STATE Grill and Bar, Tacombi, and Starbucks. For more information and Observatory Experience tickets visit esbnyc.com or follow the building's Facebook, Twitter, Instagram, Weibo, YouTube, or TikTok.