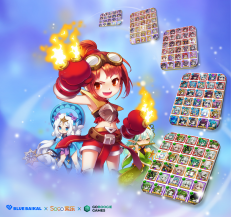 SINGAPORE - Nyenta -- Blue Baikal has secured a popular game IP and gave wings to its blockchain NFT and DeFi business. The company announced on November 3rd that it has secured the intellectual property rights for Summon Princess, a mobile idle RPG game developed by Soco Network Technology.

This move by Blue Baikal is part of a strategic alliance centered on blockchain joint business with the Chinese game developer Soco Network Technology and North American game publisher Goboogie Games. Soco Network Technology, based in Shanghai, China, has developed many hit titles such as Grow Away and Summon Princess; and Goboogie Games, based in Vancouver, Canada is servicing a number of online and mobile games to the global market.

Shortly after its global launch in 2019, Soco Network Technology's beloved Summon Princess ranked first in the App Stores' Download Ranking. The game follows a storyline of fighting alongside hundreds of heroes until legendary princesses are awakened to join the battle. As an easy turn-based strategy RPG, beginners can learn to play within seconds of picking the game up. Summon Princess has garnered a lot of attention and gained popularity with its wide variety of contents and cute characters.

More on Nyenta.com
Blue Baikal stated, "Using the proven commercial success of Summon Princess's IP, we are preparing a blockchain game service and NFT-integrated DeFi product in conjunction with Goboogie Games […] we intend to contribute to the entertainment industry ecosystem by utilizing the aforementioned technologies."

In the upcoming NFT-integrated blockchain game, Blue Baikal plans to issue princesses as digitized assets, which players can own when they awaken a princess in game. This commemorative product is an NFT (non-replaceable token) digital asset that Blue Baikal guarantees the issuance.

As for a DeFi (decentralized finance) plan, a marketing funding product to finance the blockchain game project will soon be released. "We expect our participants to receive stable profits from providing marketing funds, as well as additional revenue derived from the DeFi front" Blue Baikal explains.

Targeted business areas include crowdfunding to secure necessary capital, stores for inexpensive global distribution, social media services for user acquisition and content promotion. The future expansions will cover all major digital content sectors such as movies, music and webtoons in addition to the current game services.

More on Nyenta.com
In the meantime, Blue Baikal is leading the way with advanced blockchain technology in connecting entertainment content creators, influencers, and consumers by supporting small and medium-sized entertainment producers.


####
About Blue Baikal
Blue Baikal is the third space where consumers, contents, and creators around the world are connected through blockchain technology. It pursues cultural diversity and integrity in the entertainment business, as well as a fair distribution of profits.