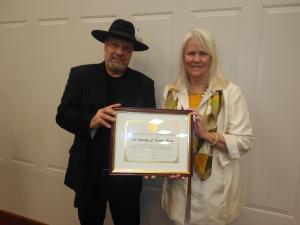 CORTLANDT MANOR, N.Y. - Nyenta -- A one-man band changed the lives of Hudson Valley residents forever. Guy Davis, 2022 Grammy nominee, performed in the Hudson Valley in September and left a legacy that lasts throughout this holiday season and beyond.

"I am grateful that my performance and songs had anything to do with getting recognition for true heroes," Davis said.

Thanks to a recent performance by Davis, two heroes proclamations were issued by the Town of Cortlandt's longtime supervisor Linda Puglisi honoring Charlie Wassil, a Peekskill detective that died after 9/11 complications, and Kenny Kear, a local beloved guitarist and counselor.

"The importance of their work cannot be overestimated," Davis said. "If a song can bring movement and attention and hope to the individuals who gave so much more then that's a good thing."

The high school, which both Wassil and Kear attended, will also dedicate a "Hero Hallway" to honor high school veterans, in part due to Davis' performance.

"It's not easy to move the arms of government, but thanks to Guy Davis and his moving tribute, the town realized that love is life and passion moves us forward," Kis said. "Amazing how a songwriter, an American roots artist and a bluesman is reaching into the hearts of America this holiday season."

Davis performed a tribute at Fulgums in Montrose, New York on September 3 to honor town heroes. He also debuted a song which he wrote during the COVID-19 pandemic specifically for those heroes who passed away due to the attacks on 9/11, including Wassil who was a first-responder on the scene on that fateful day and died several years later due to a 9/11 related illness.

More on Nyenta.com
While the night was filled with tears of joy, the true magic lies in the fact that the performance motivated city officials and local leaders to issue proclamations that highlight the power of music, gratitude, love, and sacrifice.

The holidays are times that we often reflect on loved ones that are no longer with us. Remembering them is not always easy, but thanks to Davis, Kis, and the Town of Cortlandt, the community is able to reflect and cherish loved one's lost during the holidays and in the future.

Davis plans to make another impactful visit with a blues performance at the Paramount Hudson Valley Theater in Peekskill, New York in March. His first time performing there was opening for Chuck Berry in the 1990s, now he's excited to come back and shed more musical light.