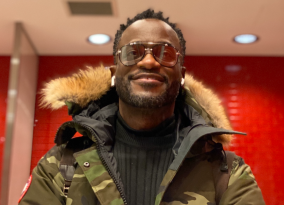 "Within 96 hours of teaming up with the HHFF's co-founders, Dr. Glenn Toby was able to leverage his extensive contacts and raise $5 million for the brand's launch, an almost unheard-of success which still had the company's founders shocked. Dr. Glenn Toby is a hip-hop pioneer," explains HHFF founder, Lloyd Leonard. "He has the business aptitude to run successful businesses, he also has a heart for humanity, feeding and providing clothing to the homeless and undeserved, this is why he is leading our company."

More on Nyenta.com
"Hip Hop is the DNA of modern culture," explains Dr. Glenn Toby. "It's not just music, culture, and a lifestyle. It has grown from the boroughs of New York City to be embraced by billions of people around the planet. Partnering with Leon Youngblood SR was an easy choice. Youngblood has built an invisible machine, as a talented thought leader with proven products and intellectual property it only took me a few hours to find and finish this deal."

Founder Lloyd Leonard is a serial entrepreneur with a Midas touch. He is the brand's founder and is singularly focused on HHFF Apparel, in addition to various companies he has founded and funded, over the years he is a long-term donor to various charities, purchasing various books authored by Dr. Glenn Toby for distribution to disadvantaged youth in literacy programs at The Book Bank Foundation.

Leon Derrick Youngblood SR, is a platinum-selling music producer for Recording Artist Chris Brown, he brings his skills as a businessman from the corporate world to the HHFF Apparel Company. Over the years, he has generated more than $200 million dollars for AT&T. Super Producer Leon "Roccstar" Youngblood Jr is his son and produces for Jennifer Lopez and Post Malone. Founder Lloyd Leonard could not believe how cheap real estate is Post-Covid in some states. He wasted no time and is making good use of the 5 million. Talking with real estate agents trying to locate the best cities with tax incentives for the company to open up their headquarters.

More on Nyenta.com
Dr. Glenn "Sweety G" Toby has a track record of representing uber-successful celebrities, athletes and entertainers, in the world of music, television, film and NFL, NBA World Champion Boxing and Olympic track and field. Dr. Toby is also the founder of the long-running, successful, Book Bank Foundation, a not of profit (501c3) charity, and a board member of The Peter Tosh Foundation.