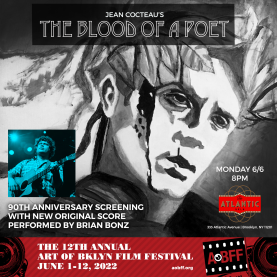 On Monday June 6, the Art of Brooklyn Film Festival (June 1-12) presents a 90th anniversary screening of Jean Cocteau's surrealist film The Blood Of A Poet with a new, original score performed live by Brooklyn musician Brian Bonz.
BROOKLYN, N.Y. - Nyenta -- Brooklyn musician and composer Brian Bonz has created a new, original score for the 90th anniversary of Jean Cocteau's 1932 silent classic The Blood of a Poet and he'll perform it live Monday, June 6th at The Atlantic BKLN. Commissioned by The Art of Brooklyn Film Festival, Bonz will play alongside Cocteau's sensual, dreamlike film, an event that brings the early 20th century avant-garde and 80s downtown club performance into 21st century Brooklyn.

The Blood of a Poet's surreal images and shockingly effective lo-fi special effects have inspired a thousand music videos, and Brian Bonz brings his love of ambient music infused with a sense of pop to his new, original score. Art of Brooklyn Executive Director Joseph Shahadi says, "After a tough couple of years for live music and films we're happy to offer this unique collaboration between an avant-garde master and a 21st century Brooklyn composer and musician. Bonz is such a beautiful weirdo that he seemed a perfect fit."

More on Nyenta.com
Brian Bonz has toured the world with The Get Up Kids, Brand New, Do Make Say Think, and The Starting Line, performed with Kevin Devine and the Goddamned Band and fronted Brian Bonz and the Dot Hongs. He has released music through Triple Crown Records and was invited to perform a full session for music and pop culture publication Paste Magazine, streaming on their channel. An exciting performer, (when not playing music Bonz is one half of the gonzo comedy duo Bobo Touch with childhood friend Mike Rizzo)  Bonz says, "(Art of Brooklyn Film Festival) has featured so many amazing filmmakers and is building an amazing community, I'm really excited to be doing this with them."

The Atlantic BKLYN is an exciting venue that features an eclectic line up of new music, jazz and Downtown luminaries like Marc Ribot and Arto Lindsay. With a mezzanine overlooking a stage backed by a giant video screen, it's intimate, dark and sexy. Shahadi said, "It's the perfect spot for this multimedia music performance."

About The Blood of a Poet:

More on Nyenta.com
Told in four episodes, an unnamed artist is transported through a mirror into another dimension, where he travels through various bizarre scenarios. This film is the first part of Cocteau's Orphic Trilogy, which consists of The Blood of a Poet (1930), Orpheus (1950) and Testament of Orpheus (1960).

About The Art of Brooklyn:
The Art of Brooklyn Film Festival brings Brooklyn's celebrated film and media makers together with their peers across the country and around the world. The award-winning AoBFF is a filmmaker-focused event, platform and showcase for exciting emerging creators and established voices.  Founded by working artists in 2011, AoBFF has held events in nineteen different venues in nine neighborhoods across Brooklyn — so far.