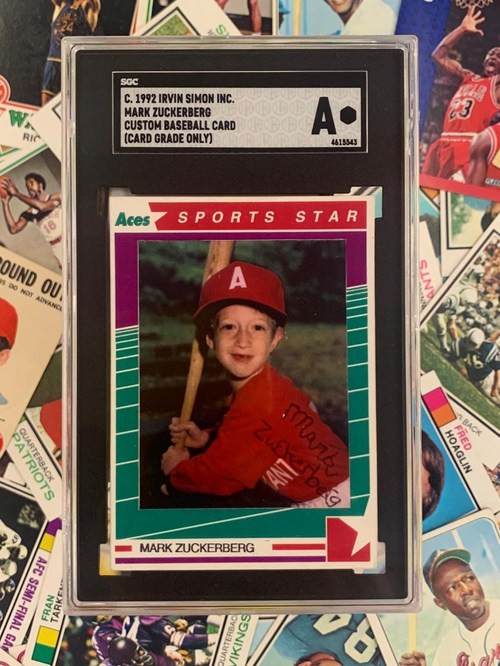 NEW YORK, Sept. 23, 2022 /PRNewswire/ -- Back in 1992, Irvin Simon Photographers, the largest independent school and sports photographer in the New York area, captured a picture of an eight-year-old Mark Zuckerberg posing with a baseball bat. Now known as the CEO of Meta ( Nasdaq: https://www.prnewswire.com/news-releases/#finan..." rel="nofollow external noopener">META), Zuckerberg's autographed little league trading card and NFT, including documents that authenticate its existence, is being auctioned this week. The once-in-a-lifetime auction is hosted by ComicConnect, the leading auctioneer of vintage comic books and pop culture memorabilia.

More on Nyenta.com
Professional photos of a childhood experience – whether for a new school year or a sports team – capture priceless memories that aren't just about today, but tomorrow and beyond. "Every kid deserves a beautiful photo that showcases who they are, even if they're not Mark Zuckerberg," says Steve Miller, President and CEO of Irvin Simon Photographers. "Every child's photograph we take is special, and we are delighted to see the value of a childhood portrait represented at the auction."

In 1992, Zuckerberg was an eight-year-old boy who attended Elmwood Camp in Westchester County, New York. According to his trading card, he weighed 48 pounds and had a .920 batting average. Today, future change-makers are getting their pictures taken, safeguarding special moments in time. So, hold onto your school and sports portraits because they become more valuable with time.

Founded in 1946, Irvin Simon Photographers is a school and sports photography business committed to taking beautiful pictures of the people you love. For over 75 years, the family-run business captured many smiles, but never imagined capturing the portrait of Meta's CEO.