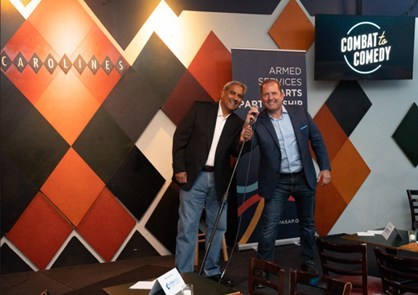 ASAP is a nonprofit that builds creative communities where military veterans and their families thrive through the arts. Veterans who take ASAP classes build their resilience and confidence, restore a sense of purpose and rediscover the bonds of their service. To date, PenFed has donated over $200,000 to support the 2,000 veterans in the ASAP community. The "Combat to Comedy" performance raised $236,000 to support veterans in the arts.

More on Nyenta.com
"PenFed is proud to continue our partnership with ASAP, as it provides members of the military community free art and comedy classes," said Schenck. "ASAP provides veterans and their families the opportunity to develop new skills, hone their stories and connect to another supportive community after leaving the military."

"PenFed has transformed thousands of veterans' lives with its committed, long-term support of the ASAP community," said ASAP Executive Director Brian Jenkins. "Our Combat to Comedy event is just the latest example of PenFed addressing the challenges many veterans face after their service."

About PenFed Credit Union
Established in 1935, Pentagon Federal Credit Union (PenFed) is America's second-largest federal credit union, serving 2.8 million members worldwide with $36.6 billion in assets as of June 30, 2022. PenFed Credit Union offers market-leading certificates, checking, credit cards, personal loans, mortgages, auto loans, student loans, and a wide range of other financial services. Our mission is to empower members of our community to achieve their financial well-being. PenFed Credit Union is federally insured by the NCUA and is an Equal Housing Lender. To learn more about PenFed Credit Union, visit PenFed.org, like us on Facebook and follow us @PenFed on Twitter. Interested in working for PenFed? Check us out on LinkedIn. We are proud to be an Equal Employment Opportunity Employer.